Since the 2000s, customs duties and taxes on mobile phones and other terminals have fallen from CFA 2 billion francs to less than CFA  100 million francs today. In a context where the Cameroonian market imports 4 million mobile phones per year, i.e. a potential of CFA 13 billion  francs, if the device unit were to generate CFAF 10 000  in respect of customs duties and taxes, i.e. a gap of more of CFAF 12 billion, the government thought it was time to increase the capacity of customs profitability of these goods which is constantly declining.

In an environment where the objectives of collecting customs revenue have gone from 347 billion CFA francs in 2005 to 841 billion CFA francs in 2019, the government, in the spirit of a tax break, has considered enlarging the tax base by exploring the niches that still escaped taxation on the one hand, and looking for the best mechanisms for collection and securing of revenue on the other hand.

This is the raison d’être of the reform of the system of digitally collecting customs duties and taxes, the spirit and the letter of which were presented to Parliament by the government; this was recorded and enshrined in the 2019 finance law in its section 7 for implementation. It is therefore not a new tax, but the materialization of the desire to diversify the sources of financing of the budget through the exploitation of pockets of revenue.

Ultimately, it is a question of optimizing the revenue collected on telephones and terminals (tablets and modems) imported into Cameroon, whether they spontaneously paid the duties and taxes when crossing the border, or whether they were introduced fraudulently or with suspension of the said duties. And more importantly, it is a question of multiplying the revenues of this segment by 2500% in the first year of implementation. Among other objectives, we can cite the desire to provide the Customs Administration with modern tax collection tools, fight against bad practices by automating collection or even eliminate any effect of smuggling on telephones and other terminals imported into Cameroon.

All this does not open the way to double taxation as some might think. Indeed, when crossing the border, the importer must legally pay the customs duties and taxes due on importation. This legal option is provided for in section seven of the 2019 finance law. In this case, the importer lifts a customs declaration when crossing the border and immediately pays the customs duties and taxes due.

Once payment has been made, the Platform is informed by the Customs Administration in order to avoid subsequent double taxation of the telephones and terminals concerned. Therefore terminals and phones cleared through customs will no longer receive messages on the payment of taxes and duties due.

These duties and taxes relate to the common external tariff, the value added tax, additional council taxes, the community integration tax, the community integration contribution, the African integration contribution, the IT fee. Its value is 33.05%. Phones (fixed and portable) as well as similar digital terminals (tablets, modems) which have not been spontaneously cleared through customs, are the only ones to pay these duties and taxes.

In its operation, the Platform managed by the Ministry of Posts and Telecommunications or its agent, is automatically filled in when an operator has chosen to clear his phone at the border and has paid the duties and taxes due. In this case, the customs cleared telephone that connects no longer receives the connection bonus message; because, as soon as a phone connects to one of the networks of Cameroonian mobile operators, the Platform detects and identifies it through its “IMEI number” which is in principle unique in the world.

And in any case, in the very unlikely event that terminals or phones have the same IMEI, measures have been taken to be able to assign a specific account to each phone even in the event of an IMEI account being duplicated: triangulation which will make it possible to associate other types of information such as the SIM number used or the name of its owner, the IP address, etc.

For the telephones of foreigners staying in Cameroon, a point will be set up at the customs posts of international airports to allow identification and registration on the Telephone Platform of people staying temporarily in Cameroon. Those who wish to replace their chips with those of Cameroonian operators will be charged the portion of the duties and taxes levied during their stay in Cameroon. However, if they are communicating by roaming, they will not receive a premium connection message.

As for phones cleared before October 1 and which have not yet been connected at least once to the network of a Cameroonian operator, they have until November 15 to inform the platform by contacting the customs administration. Therefore, according to the decision of 13 March 2020 setting the methods for collecting digital tax rights, “any seller of phones and/or tablets is, under penalty of incurring his own responsibility, required to inform the purchaser about the “customs clearance” or “non-customs clearance” status of these devices. Providing false information is punishable by a fine equal to 50% of the amount of the transaction”. And for all complaints, a toll-free number is open to allow consumers to address any queries and complaints.

A system has been put in place to allow the customs administration to regain possession of its duties and taxes.

A NEW BREATH AT THE DEPARTMENT OF BUDGET 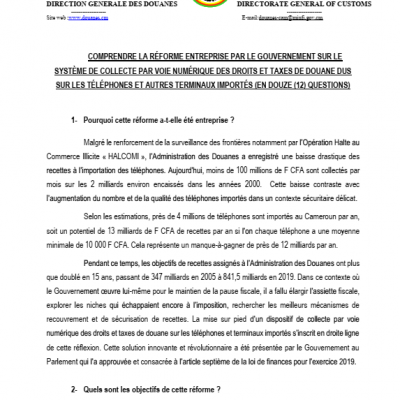